Informations for sightseeing, foods and leisures in the Netherlands.

It is not too easy to decide where to go on a short holiday with a family in the Netherlands, where it is too short for visiting a resort.

When we had this problem, however, my daughter shouted out the word “Zoo!” and I thought it was a great call!

So then I made a research and found one, which is the only zoo with a Giant Panda in the Netherlands, Ouwehands Zoo.

We went there for the first time and all the family members (wife, son and daughter) had the best day there.

would love to share this experience, which is what I am going to do in this blog!

I would suggest this zoo because of the below two reasons:

In April 2017 a Giant Panda landed in the Netherlands, and since May 2017 it has been published. I still remember the time when it was a big news that the first panda visited this country back then.

Also what surprised me in a area called Bear Forest is that in total two bears and two wolves are simulating as they are living in a 2 hectare forest. The way they live their lives in such nature makes me believe as I have encountered them in a natural forest!

Ouwehands Zoo is placed in Utrecht, with official Dutch name of “Ouwehands Dierenpark”.

You can either buy tickets at the entrance on the day, or purchase them online.

You can also purchase a ticket for your dog with 5€!

There is no closed days for this zoo, you can visit here anytime!

Pandasia is an area in the zoo which was built with Chinese traditional architecture motif.

You can check out the Panda on the 1st floor, and in the 2nd floor you find souvenirs and Chinese restaurant!

The contrast between this area and others is very big in a good way, it made me feel like I am at Pandasia!!

Of course, Panda is one of the most popular animal in this zoo as the crowd was very big. We were able to see them have lunch and my kids were so happy looking at them eat bamboo grass!

As soon as I was informed there is a Chinese restaurant in this area, my mind was already set beside all the fast food we saw nearby.

The red-sauced-noodle in the picture (right bottom) is the menu I ordered, thinking it could be a spicy Chinese noodle, however, it turned out to be just a tomato soup noodle!

This was not what I expected from a Chinese restaurant, especially when I’m Japanese and used to the Asian cuisine!

However, I am sure some of you might like it as the tasting is more leaned to European style and is something new to try!

There are quite a few restaurants around the Zoo but I saw big lines queueing in almost every single one of them, so I recommend you to have a little early lunch if you want to avoid that.

A photo of my kids in the souvenir store next to the restaurant.

I think the only phrase I heard from them in this shop was “I want this”.

The variety of goods is plenty and just looking at them was fun for the kids, too!

This forest was created with mind towards trying to help wild bears which are treated cruelly and have them protect with a safe environment.

There are several “Bear Forest” around the Europe, though the one in Ouwehands Zoo is the first one ever to be built.

In 2 hectare space with waterfall, rocks and pounds, bears and wolves are having their peaceful life. You can see them very closely due to the design of this park, and makes you feel like you have wondered around in a natural forest. 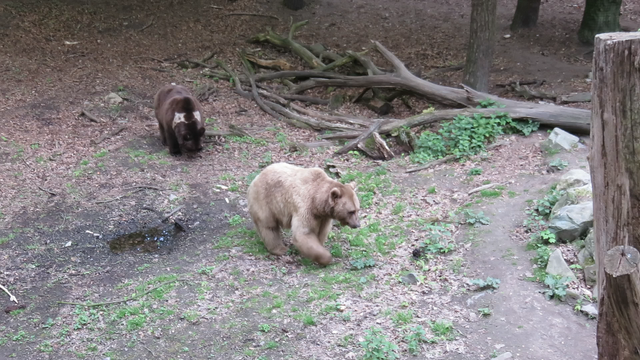 There is also a suspension bridge where you can walk over bears’ head, which is full of impact. My 7 years old daughter was too scared to go forward!

As the red circles in the below picture shows the bears and wolves are all around the places completely freely, this is where I felt that the name “Bear Forest” fits the best to the atmosphere!

Other great areas in Ouwehands Zoo

As described until now the main areas in Ouwehands Zoo are the Pandasia and the Bear Forest.

Having said that, there are other fun places you should definitely visit!

The animal who is loved by kids. GORILLA. I do not know what it is but kids just love them only by hearing the word!

This Gorilla Adventure is built in two floors, not only you can see gorillas but also there is a playground including athletics for kids to have some activities.

This is how close you can get to gorilla!

It was not too familiar for me as a Japanese person that aquarium is contained within a Zoo, which is quite rare in Japan.

I wouldn’t say the aquarium is big, but the atmosphere and color change definitely attracted my kids’ interest.

There were a several stops where a guide explains about how each animals’ characteristics and how their body works, by using bones, skins and skulls.

Their explanation is based on their long experience, so I really recommend them for your kids to listen to them as to know more about the different animals in deep depth.

My son and daughter was repeatedly asking questions but the guide was very kind and tried his best to answer every single questions. Big thank you to this guy!

Not only is it a zoo to appreciate animals, but also playgrounds for kids is very substantial in Ouwehands.

My kids would have spent more than half of the day in both indoor and outdoor playgrounds, if we were not to tell them to come back to see other animals!

Normally Japanese zoo have smaller site, meaning living spaces for animals is not too big. This makes it easier for us to see the animals closer.

However, animal cages in Ouwehands is pretty big it is harder to see animal in details unless they come closer. This was where my compact digital camera shined!

Hornbill was the first creature we saw in this zoo, welcoming us warmly!

My son was very looking forward to see a tiger but because they are nocturnal, at 10:00 they were still in their dream…

They look cute in the photo because of the camera but from our naked eye all we could see was a small creature moving around..

Same as meerkat they were too small to see from a distance, but they do look very cute!

Again nocturnal.. but still have the vibe even when he’s sleeping.

This bird was standing way too far from us, without camera we wouldn’t have bee able to see him… But my kids were very excited when they see him in the picture!

Compact digital camera to the rescue!

All the pictures on this page was taken by a compact digital camera, CANNON  PowerShot.

Very easy to carry around, and the picture quality is as good as single-lens reflex camera’s, enabled me to show my kids how the animals really look even when they were far away.